CO2 Flooding System is a specialised range of Fixed fire fighting system that specifically designed for most of the ships. It is used in places like a boiler room, pump room, engine room, etc. They can be used in any sizeable but closed space under fire for extinguishing the fire quickly and robustly.

To equip you robustly in such situations, we have some brilliantly designed CO2 Fire Suppression Systems at Supremex. 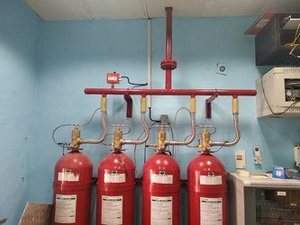 In this CO2 Fire Extinguisher Systems, a lot of cylinder containing abundant amounts of CO2 is used. As soon as a fire erupts, heavy quantities of carbon dioxide (CO2) are released which work to extinguish the fire quickly. This rapid action by our CO2 flooding system ensures that the fire does not spread to other areas of the ship causing severe harm.

A critical fire on a ship can cause a lot of harm. Being your protectors against such situations, we at Supremex have come up with this unique fire suppression system. In any critical fire situation, you can bank upon our CO2 Fire Extinguishing System to save the maximum resources and lives at the sit.

We use CO2 as the extinguishing agent in this firefighting system because we want utmost perfection and effectiveness for you. As commonly known, CO2 works as a brilliant extinguishing agent that provides fast and successful action. CO2 creates a layer of a blanket around the oxygen content in the fire and disrupts its connection with the fire system. This reaches a stage where the combustion can no longer take place due to the absence of oxygen. Thus, by targeting one of the key components of a fire, our CO2 Fire Suppression Systems help you out in critical situations.